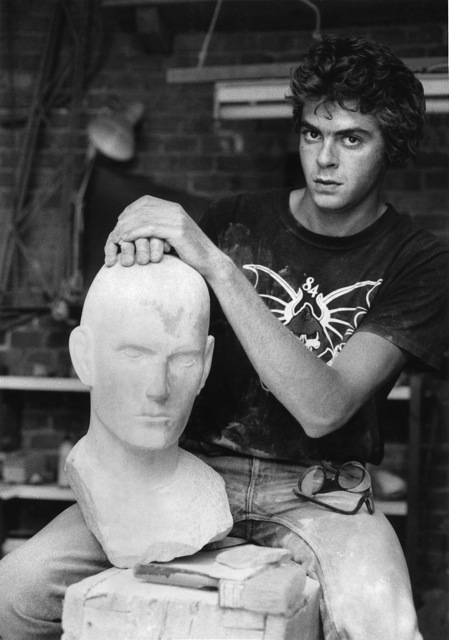 I found my voice in marble.  Carving stone is a deconstructive approach to concept-

ion which is a physical and mental concentration whose focus is the language of my abstraction. My statement is about life’s course of interaction between experience and expression.  It is an active discourse with what I have felt as the resounding call of human contiguity, said in stone.

My visual evolution is one described by my travels.  Living in Europe, I fell in love with European origins and aesthetics;  drawn, driven, and intrigued by its continuum through histories most ancient, and through its classics, to its most post-modern explosions.  My adventure began in Carrara, Italy, sculpting, and exploring Southern Europe in dialogue with art and its origins, and has continued with years of re-nourishment, in a back and forth between continents.

I was born in Savannah, Georgia in 1960.  My art quest started at an early age, as I grasped the probity of the poetics of art and verse, in contrast to late twentieth, early twenty first century commercialism and waste.  My first venture into the visual arts was through the lens of photography, until I eventually discovered marble in Cortona, Italy.

I work directly in stone. The magic begins at the source.  Marble is a metamorphic stone of sedimentary, aquatic origin.  Marble has a density, grain, and harmony, unique in its every vein and quarry.  Conception begins there.  With my sculpture, I first find an anatomical center, which predicates my deconstruction and abstraction.  It is a preconception of form transposed into voice and dimensionality and connects the body of work in a harmony of unified singularity, reaching back to a classical forum to push forward into modern context.

In a leap from the intuitive I have perused throughout my work-study, an interest in the lucidity of conceptual design.  My furniture and fountain designs present a symbiosis of my more organic statement, in an engagement with Euclidian geometry in a spatial context.  ‘Protoplay’ is an expression of this interplay.  I have called it ‘proto-geometry’, and seek to present a primal and minimalist simplicity, in industrial contrast.  The fountains ‘Abode’ and ‘Chalice” are three-dimensional extrapolations of the same.

It is the synthesis of organic and man-made form that I present, and by defining the origins of material by contrast to man made intervention I ultimately proclaim nature as the protagonist.